RealStars guest blogger Robert Schenk reviews a reportage book regarding the Swedish men who travel to Thailand to purchase sex – What are they thinking? And why do some of them move there? In Thailandssvenskarna (which means the Swedes in Thailand in English), the investigative journalist Joakim Medin brings the reader inside the Thai sex clubs, and straight into the world and values of these men.

Thailandssvenskarna gives a unique insight into the sex industry in this very popular tourist destination for Swedes. Especially the males purchasing sex get their voice heard in the book, but the author also includes research interviews, voices from Swedes in Thailand who are not sex buyers and a lot of his own views and observations. What is presented is “a world of poverty, loneliness, alcohol, sexism, racism, distorted structures and myths.” This is how the author explains the sex industry in Thailand on his website.

In the excellent preamble, Joakim Medin describes his research method. He has used investigative journalism, with hidden microphones and by easy blending in with his look and behavior with the males purchasing sex. Therefore, he manages to get the men to open up in a way that would be impossible by using traditional journalism. The method might be problematic, but Medin immediately explains the rules for the readers which creates trust.

The reader encounters several men inside the book who purchaser sex. The men are such stereotypes that it would be hard to believe that they were real if they were not quoted on tape and seen by the author. Medin writes:

”The Swedish men I encounter in Thailand have three things in common:

Especially the books sociopolitical connection is extremely interesting and transparent – how much in common the men have: their view on women, the bitterness, the dissatisfaction, xenophobia, loneliness, their longing to escape Sweden, similar political views, and not at least the purchase of sex and incessant drinking.

Medin has dedicated a whole chapter of the book to the Swedish Democrats and their leader Jimmie Åkesson. In this chapter, he writes that “all men who purchase sex that I encounter, likewise many other Swedes in Thailand, sympathize with Jimmie Åkesson. The leader’s continual travels to Thailand also strengthen the view of many of his sympathizers that he is the folkiest leader in Swedish politics. Our Jimmies travels to the same places as us.” 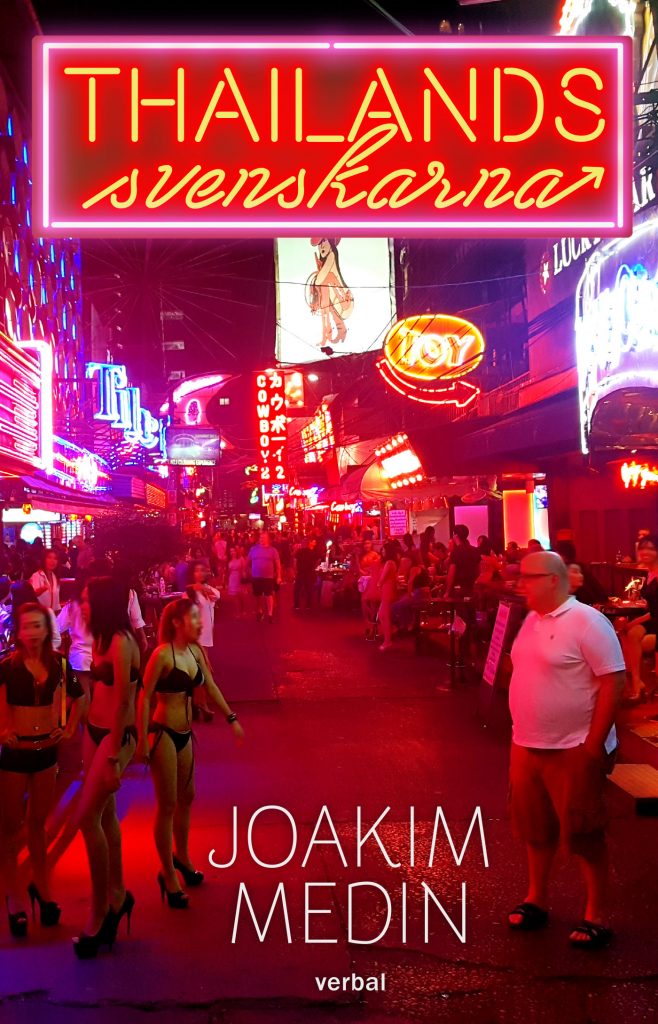 Medin does not claim to give a complete picture of the men purchasing sex in Thailand. He explains already in the preamble that many of the men he encounters are part of the working class since the author’s selection of sex clubs has been limited due to economical reasons. Therefore, more exclusive clubs have been excluded. ”This book, therefore, does not claim to give a complete picture to represent all Swedish males who purchase sex in Thailand.” This fact does not make the book less credible or less interesting, but rather awakes my curiosity of other men in Thailand since we know that purchasing sex exists in all classes of society, political views and professions.

However, I have strong objections against the chapter with the simple title Sweden’s Sex Purchase Act which is a catastrophe from the perspective of RealStars. One of the corner pillars in RealStars’ fight against prostitution and trafficking is the national and international support for the so-called Nordic model, which means the law that criminalizes purchasing sex but but does not punish those who sell sex. In the very short chapter Sweden’s Sex Purchase Act, Medin does not take a stand with or against the Nordic model. Moreover, he carefully describes the views from ”the phalange which is trying to neutralize prostitution by trying to call it sex work.” He devotes only four lines in the same chapter to ”the phalanges critics” that supports The Sex Purchase Act. It is almost incomprehensible that he does not take a stand to support the Swedish legislation. In the rest of the book, he writes his thoughts and views, and he shows a great understanding of prostitution’s consequences and underlying causes.

“but rather awakes my curiosity of other men in Thailand since we know that purchasing sex exists in all classes of society, political parties and professions”

Is it so that Medin does not dare to anger the ones he in the preamble describes as “the loud minority in Sweden that of different reasons consider that prostitution should be legalized”? That is hard to believe since the book otherwise shows both bravery and straightforwardness. Could it instead be that he is not convinced about the Nordic model being the best? He has witnessed the horrible consequences in Thailand where prostitution is completely criminalized. If he lacks the knowledge about the German or Dutch so-called legislation of prostitution then I suggest that he investigates this before his next reportage. He also should read prostitution survivors own stories in for example Rachel Moran’s Paid For or in Prostitution Narratives: stories of survival in the sex trade  published by Spinifex Press. He could also do as Margot Wallström – shadow the police Simon Häggström when meeting men purchasing sex and prostituted persons when he maintains the Swedish sex purchase act, or follow Häggström when he travels abroad to witness large brothels and the high amount of trafficking happening in the “regulated” countries.

It might feel like we are safe in Sweden; The Sex Purchase Act still has large political support. But the right-wing populism has grown in the west, and the Swedish Democrats have around 20 percent support from the Swedish voters. In Medin’s book, we get a clear picture of how many of the Swedish Democrats’ core-supporters reason and other political parties in Sweden have shown a willingness to cooperate with Jimmie Åkesson’s political party. For how long will the majority of Swedish politicians agree? It is not enough to be neutral like Medin in a book about the prostitution industry, you have to take a stand.

Due to this reason, I would only recommend Thailandssvenskarna to RealStars supporters, that are already informed of the value of The Sex Purchase Act. As mentioned, the book gives a unique insight into the world of the men who purchase sex and the prostitution industry. To other readers, I would not recommend this book. I do not want them to read another text about the prostitution industry that does not take a stand in favor of the Sex Purchase Act. It is enough that Amnesty in Sweden published on their website that they “do not take a stand with or without the Swedish Sex Purchase Act”. Why should Joakim Medin also stay neutral in the question?