During a week in April, RealStars visited six upper secondary school year 1 and year 2 classes following the Science and Economy programs at Jensen and Norra Real. We discussed human trafficking, sex slavery and Fair Sex in English as a part of the students’ regular education. During the same week RealStars also visited a Social Studies class at Norra Real!

Throughout value exercises and workshops, many students asked though questions, which tested the knowledge of RealStars new Process Administrator in Stockholm, Anton Gustafsson!

As a part of an examination exercise in English, the students will write a report, or make a presentation, on the topic of “Fair Sex – Against Trafficking”. To prepare for the exam, the students will play the web game “Fair Sex – The Network”. A majority of the students at Jensen Upper Secondary School North also chose to sign RealStars petition for a Europe free from trafficking after the workshops. 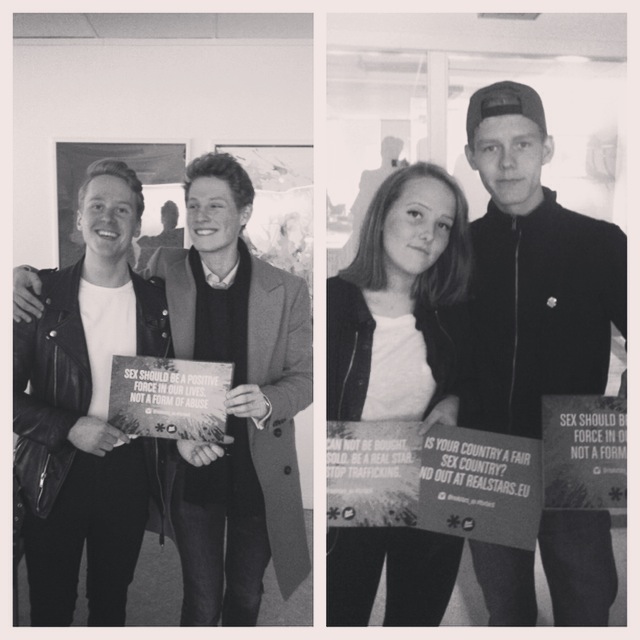 The same week, RealStars also visited highly motivated students at a Social Studies class at Norra Real Upper Secondary School. The students in the class had many interesting questions regarding Swedish legislation, and why many other European countries have such a liberal perspective on the purchase of sexual services. The class also talked about who the individual whom purchases sexual services is, and how the commercial demand of these services stimulates sex trafficking. The lecture was rounded off with a short workshop where students performed a very energetic value exercise, and all students had interesting and insightful opinions All students in the class also chose to sign RealStars petition for a Europe free from trafficking!

RealStars would like to take this opportunity to thank the students at Jensen and Norra Real upper secondary schools for pleasant and productive visits! Together, you are all stars who can make a difference!