The sex trade at Thai massage parlors has expanded and proceeded undisturbed around the country. Now the organization RealStars is launching a labeling and an educational film to focus on demand with the support of the Sex Purchase Act. The industry is involved for a joint force demonstration.

Sex purchases at hotels and during the trip abroad have received attention for a long time. Sex purchases at Thai massage parlors have not received the attention they deserve, however, despite inspections showing an alarming trend where men demand sex purchases at Thai salons continuously. Women who work with body care at Thai massage salons live in an exposed, often stigmatizing and insecure environment. During the year, RealStars has, with the support of the Swedish Gender Equality Agency, implemented the initiative A business free from Trafficking in which the massage industry has been involved. 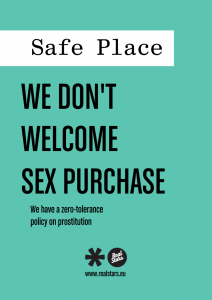 – We have now produced an information film and a label, We don’t welcome sex purchase, which will support the industry to mark against sex purchases at massage salons. In our dialogues with women in Thai salons, we have encountered frustration but also a strong will to act and restore pride in the industry, says Malin Roux Johansson, RealStars’ General Secretary.

A survey of the police’s intelligence activities in 2017 showed that there were around 90 Thai massage salons that offered sexual services. The street magazine Faktum’s examinations reveal, among other things, that the number of salons has increased fivefold in the last ten years and they have also made a low estimate of the sex trade’s turnover which shows 90 million Swedish crowns per annum. In the report, women testify how they are regularly harassed by men who wants to buy sex and are threatened when men demand “extra services”. There is a high prevalence of undeclared workers who sometimes also lives in the salons.

– The massage industry is interesting for the Swedish Gender Equality Agency as purchase of sexual services, sometimes is linked to human trafficking or other forms of human exploitation, occurs there. The label focuses on buyers and thus demand.. We know that there are massage salons that works as disguised brothels, says Mats Paulsson, Senior Investigator at the Swedish Gender Equality Agency.

The initiative has received positive response where cooperation is valued to counteract the sex trade and the insecure work environment. Moa Nilsson, masseur and owner of Moa Alishba Thaimassage & Spa participates in the film that RealStars has made.

– I have worked in the massage industry for many years and encountered the problem of stubborn sex buyers. It is time for everyone to take a stand against sex trade. Now we finally have a label for Thai massage salons just like for hotels. But above all, I hope that more people in the industry joins in so we can take a stand together and avoid women and children being exploited, says Moa Nilsson.

This year, the Sex Purchase Act has existed for twenty years and in connection with this anniversary, RealStars calls on authorities, police and property owners to take new measures in accordance with the Sex Purchase Act and the Procuring legislation to stop exploitation and sex trafficking, also within the massage industry. The society must also provide protection and support to people in prostitution.

– The idea is also that the film will increase awareness among the public and call for vigilance to act against sexual exploitation, says Malin Roux Johansson.

Get more information about the situation and the initiative in RealStars report about Thai massage and sex trafficking and on the the website.