Following the debate initiated by the Swedish Association for Sexuality Education (Riksförbundet för Sexuell Upplysning – RFSU) on the impact of the Swedish Sex Purchase Act’s, we emailed Kajsa Wahlberg, a detective at the National Police and National Rapporteur on Human Trafficking. We wanted to hear directly from her about how the Police see the Sex Purchase Act’s effect and how she sees work in this area progressing. 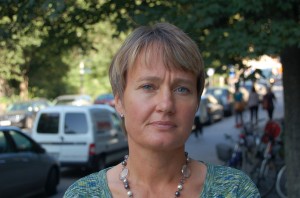 What do the Police and other government agencies see as the major impacts of the Swedish Sex Purchase Act?

Firstly, the law has led to reduced street prostitution which, in turn, has led to fewer street disturbances and lower levels of criminality in those areas where street prostitution is/was to be found. Prior to introduction of the Sex Purchase Act, the Police received a lot of complaints from the public about these issues. People would not go through these areas and girls and women were accosted by people looking to buy sex from them. In those areas where there is prostitution, there are often other crimes including narcotic crimes, assault, money laundering and traffic offences.

We have also noticed that pimps and human traffickers do not see Sweden as an attractive market for their criminal activities as people buying sex are worried about being caught. They try to establish themselves here but are unable to do so to the same degree that you see in other countries that do not have similar laws.

The Swedish Sex Purchase Act has previously been criticized including in a recent study commissioned by the RFSU that questions the effect of the Act, pointing to, amongst other things, the increased stigmatization of prostitutes. What is your response to that?

Prostitution is always stigmatized, even in those countries where prostitution is legalized. I do not understand how a law in and of itself can cause this stigmatization. I do not agree that the activity moves underground as a result of the law. Even before the change in the law, sex purchases took place indoors or in well-hidden areas. It is in the nature of the act. The actual idea is, of course, to reach out to the marketplace, the sex buyers, which is not that hidden for those that want to know where prostitution is occurring. If people buying sex can find the women, so can the Police. It’s about attitude and priorities

It is of importance to the Police that those involved in prostitution are not criminalized: It means they will not refuse to speak to us and it takes away a barrier for the Police when making contact with them. Otherwise, there is a risk that they believe the Police want to get them, which is the case in many other countries where prostitution is a punishable offence.

On the question of a reduction in the number of sex purchases, we also need to ask ourselves what the situation would be if there was not a law forbidding the purchase of sex? The law works mainly by making something punishable and, in doing so, it becomes a barrier for most people to commit the act. I’m not aware of any law that works 100%. For example, it is forbidden to steal, but acts of theft still occur. We would probably see more of that if it were permissible to just take things.

Going forward, what do you see as important in continuing to reduce the sex trade and to protect the victims of human trafficking and those that end up in prostitution?

– The Police should work more to prosecute sex trades and to prevent human trafficking, It is also important to act as early as possible when we see signs of young people involving themselves in these activities and getting into trouble. There is a risk otherwise that they end up in prostitution in the long term. This is where the Police are working actively in cooperation with Social Services to develop and spread new working methods and to localize and find these young people.

You can find a previous blog with Kajsa Wahlberg on Police work against trafficking here!