A strong, captivating and informative lecture was given to the listeners when Realstars invited Anna Zobnina from European Network of Migrant Women to give a lecture at Clarion Hotel Post, one of the Fair Sex-hotels.

Network of Migrant Women is a feminist network of grassroot-organizations that are active in 20 European countries with a vision that all women and girls in Europe that migrates or flees are in title of a fair treatment and a life free from violence, oppression and discrimination. Annas lecture has given the listeners a better understanding about what an unbelievably oppressed situation these women and girls are in.

Anna tells about a refugee camp in Lebanon where women and girls are afraid of using the toilet in fear of being raped or abducted, women who are abandoned by their husbands who have travelled ahead to get residence permits in another country and are never heard of again, women and girls who simply disappear, women and girls who doesn’t exist on paper. Because of the bureaucracy that stipulates that paper for citizenship must go through a man the consequence is that it is impossible for many women and children to get papers – and they also don’t exist in the statistics. They become invisible – who protects a woman or girl that “doesn’t exist”? Who is looking for them if they disappear? This is a situation that makes it easy for women and girls to become victims of human trafficking which is a big problem in the refugee camps, but it isn’t prioritized because the situation in general is so bad. One thing that Anna pointed out is that often when you talk about children you mean both boys and girls. This is causing that girls and the problems the specifically face disappears and isn’t sufficiently acknowledged. One example is that when measuring children missing in Europe it isn’t showing that more girls than boys are going missing.

Another aspect that was brought up was the connection between racism and prostitution. Anna brought up that racism is a form of ”othering” – a way to distance yourself from a group. The group becomes “the others” which means that you create differences so that later you can blame or ascribe traits to these “the others”. Prostitution is also a form of “othering”, in that sense that prostitution may seem okay for other women to be in, but not for one self, ones mother or ones sister. It will also be a form of alienation when there is a difference between which women in a vulnerable situation that are seen as acceptable and for which women who aren’t.

Furthermore Anna spoke about topics such as violence against women that are masqueraded as culture or religion, different forms of violence against women and how the rise in fundamentalism in Europe is a big problem. In short, this was an incredible lecture that ended in a more positive spirit in showing that there is a strong feministic involvement in Europe that focuses on that these issues are being brought to light and works to change the situation and that solidarity between women can be a powerful source of change. This we take with us and let’s keep up the fight!! We also have a film tip that we want to share: Bar Bahar – Inbetween two worlds. Maybe something for this weekend?

After the lecture, Realstars had their annual meeting for 2018 and the lecture was a good and insightful element for us who are involved in Realstars important matter when it comes to spreading the Swedish regulation of commercial sex acts and to counteract all forms of sexual violence. Please sign our campaign For Fair Sex – Against Trafficking at https://realstars.eu/for-fair-sex/ 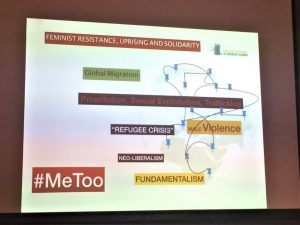 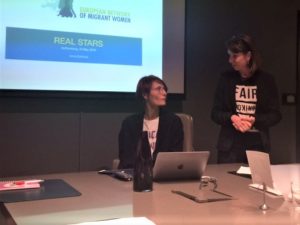 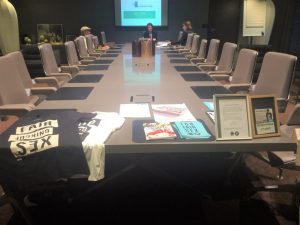 RealStars_eu Leaving no one behind - Breaking the science on trafficking for sexual exploitation” EU-kommissionens sammankomst i… https://t.co/D3xFF0qTzV
18h • reply • retweet • favorite