Realstars has launched a project funded by the Swedish Inheritance Fund to improve the possibilities of a better work environment together with the massage industry, public authorities and other organisations.

The massage industry and in particular Thai massage salons are one of the most insecure environments that present a risk for sexual exploitation in Sweden today. Realstars has under the last two years brought attention to sexual exploitation in connection to the massage industry and Thai massage salons which have long been operating under the radar. Through the new project funded by the Swedish Inheritance Fund, RealStars will deepen its collaboration with Thai massage salons and different industry players to hinder an alarming development by offering support to young workers.

–  We are worried for a lot of the women in the industry who already are vulnerable, living on a low income for their massage services and are pressured into sexual services. The situation has for many also worsened during the pandemic, says Malin Roux Johansson, project manager for Växtkraft Thai

The purpose of the project is to give young Thai women who work in the Thai massage salons with the risk of being, or already are located in prostitution, human trafficking or other vulnerable situations an oppurtunity to get out from this with the possibility of alternative lifepaths, personal development, skills enhancement in different professions and empowerment.

–  The project “Växtkraft Thai” is a good example of how you can include and engage important actors and resources to work against men’s violence against girls and young women. Together with the Swedish Inheritance Fund new ideas can contribute to a society where everyone can participate on equal terms. All around Sweden there exists a lot of good ideas on how to develop the right methods and action to achieve this, but sometimes they lack the financing, which is why the Inheritance Fund exists, says Gunilla Svensson, Head of Unit at the Swedish Inheritance Fund.

To avoid legitimizing sex trafficking and procuring, or jeopardize more young women being exposed to sexual exploitation demands several measures be taken by the project to increase the engagement needed among businesses, supporting organisations and authorities.

Swedish street newspaper Faktum’s investigation on the Swedish massage industry report that the number of Thai massage salons has increased fivefold under the last ten years, while also presenting a low estimation of the revenue accumulated by sex trafficking in Sweden: SEK 90 million – per year. In 2019 Real Stars produced an educational film and decals for Thai massage salons in Sweden. 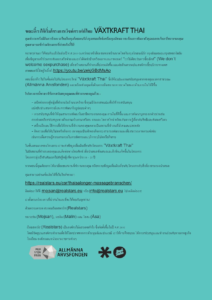