During this week, RealStars is on location at Almedalen, protesting the German ship brothel Lust Yacht in order to encourage more people to take action for an enforced legislation against sex trade. Lust Yacht is a German ship brothel advertising that the best party in Almedalen is found beyond Swedish borders. All over Almedalen we’ve found business cards from Lust Yacht with phone numbers for a free taxi boat. If the number has yet been made operational is uncertain. 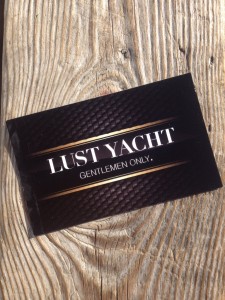 RealStars are very concerned by these developments! Strong pro-prostitution winds are blowing in Europe that don’t consider that the sex trade business go hand in hand with human traffickers and sex trafficking. If the ship brothel is anything like other brothels found in Europe then there’s a strong possibility of there being trafficking victims aboard.

And what’s worst of all? There is currently nothing stopping the ship! It only takes 30 minutes to get to a place where another person’s body can be bought and her human rights violated – all without legal ramifications. Our Sex Trade Law only goes as far as the Swedish border, and beyond that, we are as travelers no longer bound by that law.

The law must be stricter! A nationwide European Sex Trade Law with a focus on the demand would not only criminalize the buyer and the pimp but would also help prevent the ever increasing human trafficking for sexual purposes in Europe.

Spread the word about the ship brothel and get more people to take action for a Europe free from trafficking and sex trade.