Eva F Dahlgren does a good deed with her writings. Through active digging in open historical archives and her rare ability to storytell, she presents a detailed and personal description of prostitution in Sweden during the first half of the 20th century. What did one have to endure as a prostitute and what was society’s view of prostitution? Even though these writings contains realities that can be difficult to read about, Fallen Women (2013), and its follow-up in 2017, What happened to the children?, are a must-read for everyone who works against trafficking and prostitution. This historical perspective is an important contribution to the work.

Dahlgren’s work is self-sacrificing. In the books, the author tells about her own vulnerability and the need to limit herself to be able to cope with it. In her exploration through materials, she encounters the difficult fates of countless individuals. She also comes across the authorities and institutions of the time that acted according to an old-fashioned human vision and ideology.

But how old-fashioned is this actually? With a hint of an answer, Dahlgren concludes Fallen Women:

“They [the prostituted women the writer has followed throughout the book] are no longer among us. But I wait until dusk, go down to Rosenlund here in Gothenburg. For now, today’s birds have gathered and their wings have been clipped. Many go to the heavier drugs and do not get to dance either.

Today, it can be easy as a Swede to commend yourself. We can be proud to be a progressive country with a modern sex-purchasing law. A law that does not criminalize the prostituted persons.

But in the first part of the 20th century in Sweden, the debt of prostitution laid on the women, and that the prostituted belonged to “society’s bottom”. It is not so different from today, where women ended up “on the street” due to poverty, substance dependency and childhood trauma. Even so, during this time, prostituted women got labeled as:

These references can be found in Fallen Women, where the author tells in a captivating and sensitive way about the interwar period forced labour institution in Landskrona – its prisoners (prostitutes who are arrested for violating the vagrancy law), its staff, and its ideology. Thus, the book gives us an important insight into how Swedish society during the first half of the 20th century viewed prostitutes and other vulnerable groups. Here is an example of trafficking, which at that time took place within our national borders:

“Outsiders who come to the institution [in Landskrona] are forbidden to speak to the inmates. But a 16-year old charcuterie worker feels sorry for them. He listens to their stories when he comes with good and smuggles snus among other things under his bulky hat. In old age he tells in an interview”:

“I will never forget this one very nice cute girl, that I smuggled little caramels to. She was a newcomer, that was beaten black-and-blue and wore a sorrowful expression. She came from a ‘statare’ contract-worker family in Södertälje and had responded to an advertisement in Stockholm. She ended up with a pimp, got a job at a cafe and had the pimp take care of her. She brought in a lot of money, but it wasn’t enough for him, and he began beating her.  It continued for about two years before she went to the police.”

Two years,. Yet it is not so strange that she waited a long time to make a police report. She knows that whenever she gets beaten, she will be sentenced and punished having an indecent lifestyle.”

According to the research “of that time”, women become prostitutes because of inherited inferior characteristics. In this way, the book Fallen Women is closely related with Dahlgren’s earlier book My Grandfather was a Race Biologist (2003). The racial biologists wanted to prove that “according to science”, ‘the interior of the man revealed the exterior’ and subsequently they went around the country to photograph body characteristics of various “inferior” types or races. Advocating forced sterilization as important for the future of the human race became the next step.

Of course, the researchers could never prove the correlation between, for example, head shape and personal characteristics, but when the law of 1941 which facilitated sterilization ceased in 1975, a total of 63,000 people had been sterilized in Sweden. Several studies reveal that about half of the sterilizations that took place, were against the person’s will. The operation was much more dangerous for women than for men, yet 90% of those sterilized were women.

The female inmates in Landskrona became one of the targets of these “scientists” and it was also their photos that the author came across in her previous research, which was the start of Fallen Women. Dahlgren weaves together the stories of the inmates in a fascinating way. She recruits source material with facts and statistics, interviews with current Swedish researchers, meta-comments about her own vulnerability, and novel-like sections. In this way, you as a reader get strong emotional experiences while learning a lot about the Swedish history of prostitution in a social context.

When the prostituted women were taken by the police, they were transported to Landskrona forced labour institution. These women were victims, victims of their vulnerability as young people – from sexually transmitted infections such as gonorrhea and syphilis that was treated with arsenic and mercury; from being hunted by the police; from the laws of the state, and much more. Many of them had children, and many children were infected at birth by the mother’s diseases.

Eva F. Dahlgren felt she had to go further and explore the lives of these “illegitimate” children. Her latest book, What happened to the children, therefore became a natural sequel. The reader will recognize the concept in this book from Fallen Women. We get to read about the fate of many children and their mothers, but the author highlights two children in particular that we follow in detail through the whole book. It begins in an orphanage, and continues on “the foster children’s island” (Gålö, in Stockholm’s archipelago), and ends with how these children struggled for a dignified life as adults. We learn in this book about the heritage of prostitution, and I do not mean a genetic sense. 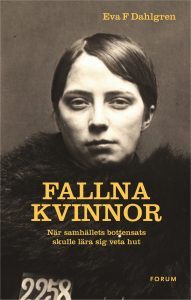