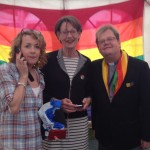 The fact that Feministic Initiative (FI), the Swedish party of which Gudrun Schyman is the leader, did incredibly well in the latest election of the European Parliament is exciting news. In a tent by the stage during West Pride in Gothenburg, Realstars managed to steal a few minutes of Gudrun’s time before it was her time to enter the stage. We asked Gudrun how trafficking and prostitution affects other issues of gender equality and her view is that both trafficking and prostitution is part of the problem. “What we have is a patriarchy where men should have access to women’s bodies”, she says and points out, that to defeat this we have to work on many different levels and from different perspectives to illustrate how all of these things are connected. Gudrun is also very positive about the Swedish law against the purchasing of sex. Since FI gained a place in the EU parliament Soraya Post will, amongst other things, be working with trafficking questions. 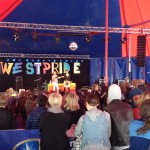 When Gudrun entered the stage to be interviewed by Mia Lodalen, the questions were filled with humour but with very serious undertones. Mian put homosexuality as the norm and heterosexuality as something of an outsider from the very beginning of the interview and on the question if Gudrun knew whether she was a heterosexual or not, she answered: “Love has no gender. When I met my husband, I met a person and gender played a lesser part, and because of that our marriage has been more on equal terms, not as focused on gender roles.” Her view is that the community sends signals that push women toward a submissive role and completely discards the idea of the complementary marriage where roles of men and women are carved in stone. She believes that dismissing gender roles would lead to a love more free of conditions, which in its turn would make a relationship richer.

Mian then told a story of when she received the question: “Has gender equality gone too far?” and on which she had answered: “The fact that you are asking this question is a sign of an intellectual meltdown.”

Both women are continuously participating in the struggle for gender equality, which Realstars sees as the best way to ending trafficking.