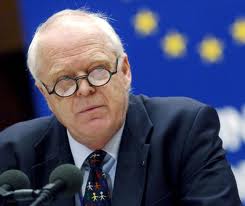 For most of his life, Thomas Hammarberg has worked with increasing the protection of human rights through various international assignments, such as the Council of Europe’s Commission for Human Rights. Thomas was given the Nobel Peace Prize in 1977 on behalf of Amnesty International.

What are you focused on today?

– The constant struggle for human rights.

Do you think human trafficking for sexual purposes has a prominent place on different agendas for human rights and social stability?

– There has been a lot of rhetoric and far too little concrete action. Cooperation between UN, EU the Council of Europe and (OSCE) on this matter has been lacking. For example, EU very rarely even mentions Council of Europe’s convention. The supervising agency GRETA or OSSE’s special representative – have even less cooperation.

Europol recently stated that trafficking has never been as extensive as now. . What should be done to turn the development and to stop trafficking?

– It is good that Europol and Interpol have reacted. I know they are concerned with the ineffectiveness of interactions with the police forces of certain countries. The lack of effective police action is a main problem. It is basically a question of PRIORITY.
– More debates regarding the fundamental principles are needed: the victims should be treated as victims and not as criminals. They should be granted proper protection when they are invited to work together with the police (long term); they should not be deported to their respective countries if there is a risk for reprisals or similar problems.
– Hardly any work has been done with the purpose of analyzing and taking action against the factors which make it possible for the traders to pick up the girls.

What’s important to think about when working with the export of the Swedish model to other countries and their citizens?

What kind of responsibility do you think the sex buyer has in the so called trafficking chain? What type of measures are useful in the protection of the victims?

A big responsibility. Stopping human trading would be much easier if the ”demand” wasn’t as vast. That’s why exploiting these girls should be a criminal offense.