RealStars visited a language introduction class at the PEAB-school on September 21.

The students were stunned by the fact that trafficking occured in Sweden and discussions regarding prostitution were very engaging.

When RealStars visited the PEAB-school we were welcomed by curious students that were surprised by the fact that trafficking happens in Sweden. One of the students exclaimed that “But that doesn’t happen in Sweden?” as soon as the topic trafficking came up. After we explained that Europe has the highest number of sexslaves per capita in the world the students got a lot more interested. (Kara, 2009)

What really brought up a lot of emotions were prostitution. The students were uncomfortable with the Swedish law about purchasing sex and questioned why both parties were not criminalised. Us, the people from RealStars explained that Sweden’s legislation aims not to impose gulit upon the seller due to the fact that he or she (most often she) is forced to do so by outer or internal force. We explained that modern day slavery deals with prostitution and that it is hard to draw a line between prostitution and trafficking because other people’s body’s are exploited. A lot of students had a hard time understanding why a woman that cannot get out of poverty would sell sex. “Why would someone that has a good life sell sex? Then it has to be her choice” one student reasoned.

So why is it like that? Does a person who is exploited for prostitution have a good life? In an inquiry in 2004 (Cotton, Farley and Lynne, 2004) 90% said that they had been victims of violence in relation to prostitution. 85% had experience sexual assault during their childhood. 72% suffered from post traumatic stress disorder. 92% wanted to get out of prostitution but did not see another way of making money. These people (women) do not live a good life.

The same day RealStars also had a presentation for Learnia for SFI. There a discussion whether prostitution could be seen as a form of “work” or not was held. Us, the RealStars team, presented the numbers previously mentioned and asked the listeners: “Do you believe this to bae a normal “work” Is there a workplace where employees would present these numbers?”.

So the next time you look at prostitution as a form of “employment” or someone close to you expresses believes that it is a type of work like any other, ask yourself the same question. 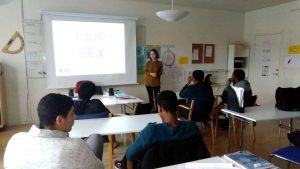 Nine Countries – An Update on Violence and Posttraumatic Stress Disorder