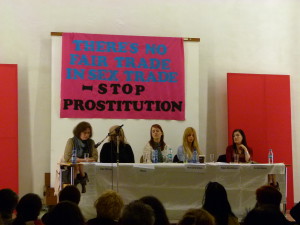 From the debate in Weisbaden

A man stands up and says: “I have bought sex twice in my entire life but after hearing this I will never do it again. I could not live with myself”.

Wiesbaden is a small city near Frankfurt with population of just under three hundred thousand. It used to be a place where the European upper class went to get rest and relax in the hot springs. Today it is mostly known as an American military base. Thirty thousand American soldiers are currently here. Most of them are on their way to the Afghanistan. A few girls told me that sometimes the soldiers do something in order to not go to the war. For example, they go to a bar and knock down someone.

Because they are not subjects to German law and therefore will be sentenced by US military court their punishment will not be very strict and they will not be sent to Afghanistan. Sometimes they also have children with local women and settle down in the city. However, it also happens that they simply go back home and leave their children in Wiesbaden.

Just like in other German cities the prostitution is present even here. Wiesbaden has seventy brothels, a red-light district located in the center of the town and one of the pimps is in the local jury, judging for example rape cases. Being a pimp is not an obstacle because it is a recognized profession just like others. But there are ten young girls in this city that have had enough. They want to fight this so they formed a feminist group called LISA. On the 8th of March they made placards against the sex industry, which they brought to the demonstrations. However, they were surrounded and attacked with paint. But they intend to continue and now even a few older women have joined them.

When it is finally time to arrange Wiesbaden’s first debate about prostitution they are terribly nervous. They have guards whose job is to check all bags so nobody gets in carrying weapon. Unlike Sweden, Germany has a massive and organized sex industry and under no circumstances do they want to have their profits questioned.

Two prostitution survivors Rachel Moran from Ireland and “Marie” from Germany are present there, together with the German feminist Inge Kleine and me. We will talk about what prostitution is. We will also talk about the Swedish model, which sets the buyer in the focus. It is not the things that happen every day that become apparent. People have travelled long way to get there. Some came from Berlin, which is seven hours away by car.

“Marie” puts on the wig because she is not open about her identity due to the fact that she is currently looking for a job. She then tells about her years as a prostitute. “I am privileged”, she says. “I was 42 years old when I started. Since I am German I can speak the language and know the law, unlike many others in this industry. Also, I was not virgin. Still though, it was a choice between scheisse and scheisse and it is still affecting me”.

Rachel Moran reads an excerpt from her book “Paid for”, which is about her 7 years working as a prostitute. The discussion continues for four hours without a break. When people from the audience stand up and give ten minute long speeches nobody seems to get annoyed. One of the sex buyers is however angry and says that sex is a human right. He continues by saying that they go against the nature by forbidding it. Another person says “I only have sex with male prostitutes and I do not believe that they are unhappy with the situation. They are doing it only because they are enjoying it”. A man stands up and says: “I have bought sex twice in my entire life but after hearing this I will never do it again. I could not live with myself. You have opened my eyes”. A woman says “I heard that it is illegal to bring sex toys into Sweden and that the number of rapes have increased”. And then a discussion about Julian Assange starts. I realize how much the prostitution has infused the German society only 10 years after the legalisation. It also happens that private employment agencies advertise jobs in brothels. Furthermore, even though it is illegal to decline social assistance to a person that refuses to accept a job in a brothel, it still happens. I was told this by a person that it actually happened to. “You have to report this. This should not happen”, said a woman when she heard about that.

Afterwards we go to a metal club to get to know each other better. We are a mix of people consisting of unemployed, kiosk workers, students, former prostitutes, retirees and activists. Several activists in LISA are members of the German left party called Die Linke. They are telling me that the men who said that buying sex is a human right are also members in that party. Manuela Schön is telling that Die Linke has not yet chosen a side in this matter. However, if the party says yes to prostitution – they will lose many young women as members. A lot is changing in Europe right now. For example, France is in the process of adapting a law against prostitution. Furthermore, in February the European Parliament adapted a historical law that advocates to punish sex buyers and not sex sellers.

A man approaches us and shouts “Why are you girls sitting here all alone?” He puts a few Berliner Weisse in front of us. We smile at him. He does not know but here are the people that are on their way to make history.

Kajsa Ekis Ekman is a freelancer and an author that recently published the book “Debt-the euro crisis as seen from Athens”. This article was previously published in Dagens ETC. To read more visit her blog.