How can men get other men to stop purchasing sex? Last fall we asked that question to advertising students, who were given the task to create ads about prostitution. RealStars are now launching a campaign with those ads, and we believe and hope that it will make a difference.

Due to Paolo Roberto’s publicized sex purchase, a lot has been written and said about prostitution and trafficking in the last couple of weeks. The media’s reporting has led a lot of people to engage in the discussion about sex purchases, and the awareness on the matter has increased. The myth about the happy hooker that “chooses” to sell sex is difficult to uphold when woman after woman explain that they have fallen into prostitution as a form of self-harm, trafficking or different kinds of suffering.

RealStars’ new campaign focuses on sex purchasing. The aim of the campaign is to spread knowledge, rebut the myths around men that purchase sex and to urge people to have the courage to take a stand against, and to question when people around them normalizes sex purchasing or considers purchasing sex themselves.

The ads in the campaign are created by advertising students. 48h is Sweden’s biggest advertising competition for students, and during 2019 the competitors were asked to create marketing material for RealStars. We are very impressed by the result and would like to give a big thanks to everyone involved.

The fact that the campaign launches in connection to the media attention regarding sex purchases is actually a coincidence. I, who managed the campaign, started working with it back in March when my internship at RealStars begun. It has been very interesting and educating to do my internship in an organization that works against sex purchases and trafficking at the same time as the matter is on the agenda and things are beginning to move forward.

I hope and believe that the last weeks’ publicized debate will make a difference. However, it is not just politicians who are able to make a change, the acts of private individuals are also playing an important part. How you respond to sexist jokes, comments and discussions about women in prostitution is of great importance. It should be everyone’s concern to prevent prostitution. Prostitution does not only affect the victims and the men that commit crimes, but rather all of us women, regardless of whether we have been affected personally or not. It may feel uncomfortable to speak up, but silence means acceptance and that means that the sex purchases can continue.

Something that has been said and written on multiple occasions is that sex buyers are “normal men” – fathers, colleagues, friends and partners. That is true, they are fathers, colleagues, friends and partners, but they are only “normal men” on the outside. One in ten Swedish men have purchased sex. What distinguishes the sex buyer from men that do not purchase sex is his view on women and people in prostitution.

Follow us on social media to see the ads! 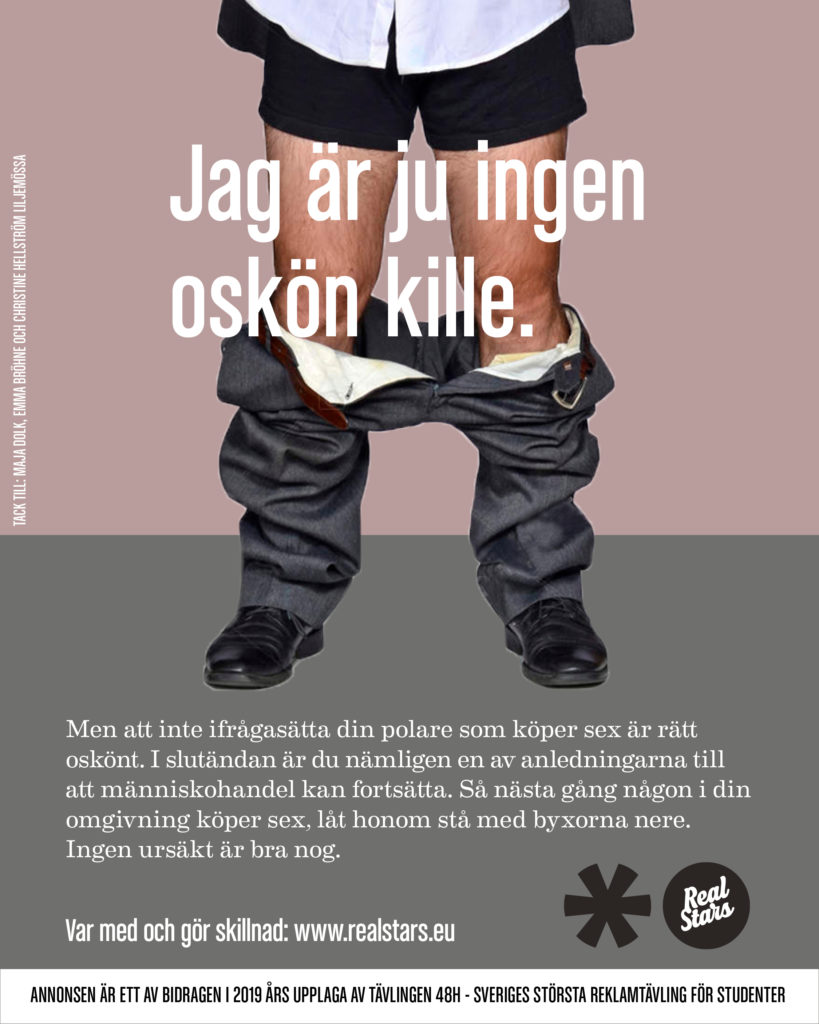