On Friday, October 16th, Realstars visited ”Demokratisoppa” (Democratic soup) Jönköping. Demokratisopppa is a concept in which citizens can listen to and participate in interesting and inspiring conversations about democracy, while having soup for lunch. This time the theme was human trafficking and prostitution. Realstars were very happy to be there. Together with Madeleine Söderberg and Mikko Roth from Jönköping’s county administrative board we talked about human trafficking and prostitution globally, nationally and locally.

Firstly, RealStars contributed with the global and European perspective on the reality of human trafficking and its connection to prostitution. Secondly, we narrowed the perspective and focused on Sweden and the Swedish legislation as a necessary tool in the fight to counteract trafficking.

Then Madeleine and Mikko from the county administrative board presented a study they have been working on called “Osynlig synlig verklighet – prostitution i Jönköpings län” (Invisible visible reality – prostitution in Jönköping’s county). During the conversation we only had time to highlight some of the stories and human faiths they have come across while working on this report. However, the report is very extensive and well worth a read. They highlighted the necessity of raising awareness about the actual situation and the necessity of improved support to young individuals who started selling sex at a very young age, both male and female. One individual they met with was only 16 when she first posted an add on a site for escorts.

“All adolescents I have met with are saying in different ways: see me! Listen to me! If you want to listen, 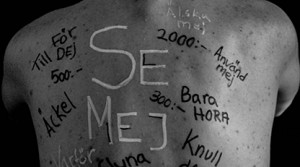 they want to tell.” says Mikko, who has been working with vulnerable youths for an extensive period of time.

During the conversation we also focused on the importance of discussing and problematizing the attitudes, norms and values that exists within both youths and adults. We have to focus more on the perpetrators and those who purchase sexual services when addressing sexual violence and prostitution. We can only concur with what Madeleine said during the conversation:

“The Swedish legislation is our most important tool in this process.”