As the EU anti-trafficking day on October 18th approaches, Realstars is acknowledging this type of modern slavery through campaigns, events and an auction. Realstars has an important and unique voice as advocates for Fair sex. We want to inspire more people to say yes to Fair Sex and refuse to accept sex trafficking and other forms of sexual abuse. Apart from the auction, many Swedish celebrities are now taking a stand by wearing our Fair Sex t-shirts with the message Fair Sex #FORFAIR6

Tradera auction
The auction will be initiated 8th of October and all the money will go to preventative work against human trafficking. A number of Swedish singers and celebrities, such as Filip and Fredrik, Jens Assur, Jill Johnson, Håkan Hellström and Kapten röd support the initiative by donating to the auction. We are extremely proud to introduce each contribution. Click here to go to the auction.

Tickets for the premiere + a meeting with Filip and Fredrik 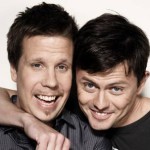 The hilarious entertainment duo Fredrik Wikingsson and Filip Hammar have given rise to lots of laughs on the tv coach and now they are donating four tickets to the premiere of their upcoming movie. As if this was not enough, the people buying these tickets also have the opportunity to hug and take selfies with the two comedians. Who wouldn’t want that? 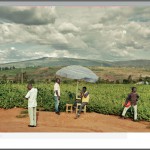 Photographer Jens Assur donates a signed copy of his amazing photo book Africa is a great country. The book shows us urban Africa in a way very different from media reports. Instead of catastrophes we get to see a hyper-urban way of life and artistic depictions of the rapid development and changes that are currently occurring. Jens Assur describes the book as follows: We are constantly fed pictures of how Africa is dying. Now I want to show that Africa is very much alive. 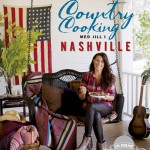 Famous singer Jill Johnson was earlier selected best female TV host of the year at the TV gala Kristallen. This thanks to her success with the TV show “Jill’s porch” which was shot in Nashville. She is now giving away a signed copy of her new “lifestyle book” Country Cooking with Jill in Nashville. The book contains recipes, Jill’s own tips and experiences from Nashville as well as the unique CD “Country Jam” recorded in her studio back home in Vänga, Sweden.

Håkan Hellström is donating a very exclusive photo book written by one of Sweden’s most famous music journalists Jan Gradvall together with Paul Hansen. The photo book has been signed by Håkan and contains pictures from the epic Ullevi concert 7th of July. There Håkan made music history with his 69 349 fans. The reputable photo book publishing company Max Ström in Stockholm has already published a total of 14 607 copies of the book. Amazing pictures!

Håkan is also giving away a record single in collaboration with artist Fänge who has created equally unique covers for all 300 copies of the single. The A-side track “Dom där jag kommer ifrån” has passed through Devil McDooms remix filter and been transformed into a psychic Madchester hit. The B-side track is “Det här är min tid pt.2” and was earlier not available on CD. Fänge is said to be one of our top contemporary artists and has during his career displayed his art throughout the world.
The covers are a special treat and none of them are identical. Every piece is thereto numbered and features a unique picture of Jens Fänge.

Swedish reggae artist Kapten Röd is donating two copies of his awesome albums. The first album Stjärnorna from 2007 features tracks such as “Stjärnorna finns här” and “Trasig”. The other album Fläcken som aldrig går bort made it number 4 on the Swedish album chart and features hits such as “Ju mer dom spottar” and “Saknade Vänner”. Apart from the fact that both these CDs are a joy to listen to they are also signed! In addition to that, Kapten Röd is thereto giving away an exclusive bag with a Kapten Röd motive; a bag you simply cannot be without.

Tickets to the show KIDS by Peter and Anna 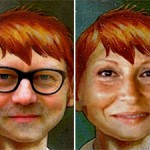 TV host and journalist Anna Mannheimer and comedian Peter Apelgren have been kind enough to give us four tickets to their brilliant and slightly embarrassing performance KIDS – ett barnsligt ämne at Draken in Gothenburg. The show is an amazing follow-up on their previous success with the show Gift- ett livsfarligt ämne. Kids is a show about having, being without, being annoyed at, loving and making children. 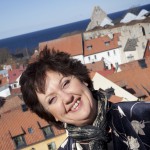 Warm and likeable comedian Babben Larsson is donating an incredible package of gifts consisting of a signed copy of her book Jag vägrar dö nyfiken. In the book, Babben reflects over the trivialities of life and with a sense of humor she makes us laugh at ourselves and our silly human behavior. The package also contains two t-shirts from the “Vad hände?” tour, which has been described as “clever, recognizable and moderately cheeky”, a can opener and a 6-month free entrance card to one of Sweden’s most famous stand-up comedy bars Norra Brunn. 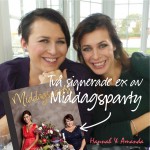 The talented sisters Hannah Widell and Amanda Schulman, who earlier wrote the books The Golden Year and Magisk sommar: mat och härligheter med Hannah och Amanda, are now giving away two signed copies of their upcoming book Middagsparty. This is an amazing opportunity for YOU to be the first one to own a signed copy of the book which is to be published in late October/early November. 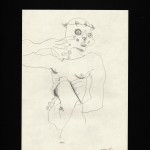 Artist Moley Talhaoul donates a drawing. His technique touches upon naïve art and pre-modernism but with a contemporary scrutinizing glance with dark undertones. His work, which depicts figures and geometric compositions, awakes many emotions. Now you can become the owner of one of his pieces.

4 tickets to the Swedish Idol finale 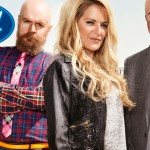 Idol is the popular entertainment show that has captured a large part of the Swedish population. TV4 now gives you the opportunity to attend the four semi finals by giving away 4 tickets. But that’s not all. The people buying these tickets will also get a backstage tour and meet the idols! 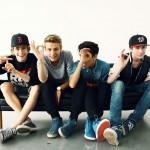 The Fooo is the group that has taken the world by storm with their hit single Kangaroos and has also opened up for Justin Bieber at one of his concerts. 2014 has been a busy year for the group with a tour in Sweden, the signing of a record deal in the US and a number of awards, including the Rockbjörnen award for best live performance. Now one lucky fan has the opportunity to dine with the popular boy band in Stockholm. The dinner is on The Fooo but travels to and from Stockholm is at own expense.

Realstars met up with high school students focusing on photography at Mediagymnasiet. The students’ assignment was to take pictures with the aim of counteracting the demand for sexual services and to get more people to realize that the demand is the biggest reason for the existence of human trafficking. The result is a collection of strong photos with a message that leaves no one untouched. Buy the students’ emotional art and make a contribution to the work against sex trafficking. 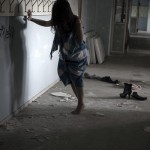 Realstars met up with high school students focusing on photography at Mediagymnasiet. The students’ assignment was to take pictures with the aim of counteracting the demand for sexual services and to get more people to realize that the demand is the biggest reason for the existence of human trafficking. The result is a collection of strong photos with a message that leaves no one untouched. Buy the students’ emotional art and make a contribution to the work against sex trafficking.