Paying in order to carry out abuse and sexual violence is part the form of exploitation that is prostitution.

”Slavery still exists, but now it applies only to women and its name is prostitution”. These are the words of the perceptive 19th century author Victor Hugo. November 12 saw the gathering of several anti-trafficking organisations at the first International Abolitionist Congress, arranged by CAP (Coalition for the Abolition of Prostitution) in Paris. The congress was suitably held in the French Parliament house in the Victor Hugo hall.

Participants from Europe and other parts of the world attended – resulting in dialogue and the creation of new connections and relationships. The program incorporated many interesting panel discussions and gripping testimonies from sex trafficking survivors. It is extremely frustrating that society is not doing more to protect these victims. It is unlikely that anyone who would have heard these stories about the reality of prostitution would consider it “sex work”; an incredibly misleading concept created by promoters of prostitution and which is frequently used both in the media and in society.

Voices and testimonies lead the way

What we see now are survivors of prostitution and abuse coming forward and speaking up about what has been invisible to most of us: the violence and injuries, trauma, depression, suicidal thoughts and post traumatic stress disorder, PTSD.

One of these survivors is Rosen Hichser who arrived in Paris after having walked 800 kilometres. Together with other victims of sex trafficking she represented the most vulnerable and discriminated women. She was also showing her support for the abolitionist movement fighting to end human trafficking once and for all.

The women travelled from Canada, Ireland, the US and Denmark and gave testimonies about the severe violence and abuse they had to endure. Their vulnerable position and lack of financial means were some of the factors forcing them to stay in this dangerous business. They are now demanding an end to the oppression against prostitutes, proper legislations prohibiting sex trafficking and overall more efforts to fight discrimination based on sex, race and class.

Prostitution is the single most important reason for the existence of trafficking. This is something we frequently point out at Realstars. By emphasising this we aim to fight prostitution as a system of modern slavery. We argue that this system is harming people and society and also poses severe obstacles and threats to human equality.

We know today that the so called Norwegian model works and that the most effective way to stop sex trafficking is to criminalise the buyer. The liberal model that can be found in Holland and Germany has instead implied an immense expansion of prostitution in these countries. This model was introduced in Germany in 2002 with the aim of turning prostitution into a mainstreamed occupation. Some 13 years later, around 60-80 percent of prostitutes are from outside the country and they are most likely victims of human trafficking. They lack rights and possibilities for protection and only 1 percent have work contracts. Overall this business has a turnover of roughly 14,5 billion Euro.

Our society is one of several trying to normalise and institutionalise prostitution as a profession. They claim that prostitution is a choice, but in reality it is the result of severe lack of other opportunities. Realstars is fighting for Fair Sex and a society free from abuse, and where prostitution is considered a form of slavery that is to be combated at any price. We are looking forward to cooperate with other proactive organisations and actors in Europe to reach our goal.

Here is the program: 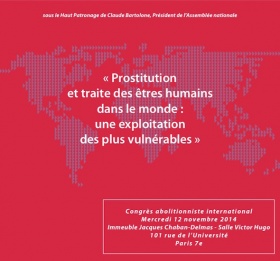