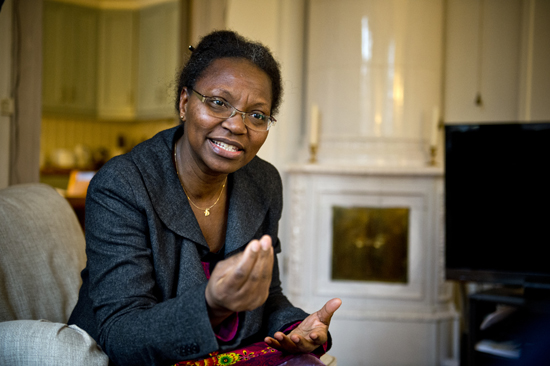 RealStars annual meeting 2019 was held in the end of May at Clarion Hotel Post in Gothenburg, and as tradition we invite a guest that enriches us. This year we got to take a part of Dr. Wanjiku Kaime-Atterhög’s research at Uppsala University. She lectured on the project DESIrE and afterwards our volunteer Susanna Gothall interviewed her regarding this research project.

What is project DESIrE?

Sweden, the Netherlands, Poland and Croatia participated in the study and was selected because the countries legislation on sex purchase differ. The research method that was used was the social innovation model HOPE, developed by Kaime-Atterhög, that builds on the importance of creating trust and safe spaces and establish contact before one can do research with people that are in a vulnerable situation. The researchers in Sweden encountered difficulties to come in contact with stakeholders to interview in the beginning of the study. The first door opened when Kaime-Atterhög came in contact with IMT (a Swedish collection foundation against trafficking) which gave her further connections in Sweden. ECPAT and so-called grassroots women became crucial for the project to move forward.

What results did the project show?
One goal with the study was to carry through the research together with participants and that they would implement the results, something that the project succeeded with. Another goal was to lift these topics to the surface. An important result that the study showed was the so called evasive dream – the fugitive dream, which is about people who start selling sex are dreaming of a better life and various related factors and circumstances lead them to prostitution as a way to get there. Once they find themselves in prostitution, they feel that they are in a black hole where the focus is trying to survive day by day. If they finally manage to get out of the prostitution it is not the dream that comes true, instead they face the serious consequences that signifies a life in prostitution. Another result was to conclude to a definition of sexual exploitation. Based on this study, the sexual exploitation should be defined as following; “Sexual exploitation means contribution/participoation in sexual services where the party providing them is exploited, for example, exploited in a vulnerable position and that is treated unfairly or in a harmful way or receives penalties that are unfair or harmful”. The study showed that a reduction of demand on sexual services can lead to a decrease of trafficking for sexual purposes. There is often a thin line between human trafficking and prostitution, which sometimes can complicate both preventive efforts against sex purchases and the protection of the victims. It is necessary to look at the sexual exploitation beyond human trafficking and look at the sex trade. To prevent the demand, it is important to also look beyond the economic factors and look at and understand the dehumanization that often occurs before sex purchases. The study highlights that the three components of the Swedish model; legal systems, support functions for vulnerable and norm change through education must be better implemented and get more resources and that there is a need for an increased focus on education.

What challenges did the project face?
A key challenge was that the researchers in the participating countries had differing perceptions and opinions on the topics being addressed, and therefore did not agree on important core issues. Instead of focusing on sexual exploitation, one of the other countries research teams spoke about “sex work” and how to do it safely, which differs from the Swedish approach and the Swedish sex-buying legislation. For Kaime-Atterhög and her research team it was important that the study should be started on a neutral ground where all the participating countries researchers would initially avoid classifying people in different ways. They preferred to use terms such as people who sell sex and people who buys sex instead of, for example, prostitutes.

What is the next step?
Even though the project is over, Kaime-Atterhög is still working closely with stakeholders in Sweden, which she thinks is positive. Another step is to let the public know about the research results so that everyone can contribute in various ways to prevent human trafficking for sexual purposes. The results can also be used to train, for example social workers, psychologists, doctors, and other personnel as there is need for these groups to receive information about prostitution. In her current work as lecturer at Mittuniversitetet in Östersund, Kaime-Atterhög is doing exactly this when she educates future social workers and psychologists on these issues. She would like to continue researching in this area.