When I arrived in Romania, I am told that four million people have left the country to work in other European countries. According to EU statistics, most of the Romanian victims of human trafficking can be found in European countries. During the visit in May, I first met Eliberare who is a relatively young organisation, just like RealStars. The organisation has a strong focus on communication to start a social movement against trafficking. Despite the country’s long time serious issues, it is only during the last year that campaigns and information regarding trafficking has reached the public.

Elibrare works proactive in both schools and in cooperation with businesses. They are a kind of advertising agency that turn to businesses to bring forward their message within ethics and sustainability. At the same time, they show businesses how to support and engage in the trafficking issue. The services are financing proactive work against sexual exploitation, work enslavement, child beggary, and situations where people are exploited to commit crimes. The other organisation I visited, AsociatiaFREE, also work innovatively. Their focus is helping those who are taken advantage of in prostitution and trafficking for sexual purposes. I meet the founder Laetitia Gotte, who is a social worker originating from France. She has lived in Romania for seven years. They continuously try to find new ways to reach out to those who are exploited for prostitution in Bucharest, on the street and in so called massage parlours. 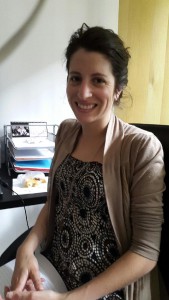 Besides organisations like AsociatiaFREE, there are organisations that stand for ”harm reduction” and pass out condoms actually promote the legalisation of prostitution. AsociatiaFREE see the damage from prostitution and try to help the women, girls, and sometimes boys to a new life and a job. Their work is made harder, not only because it is hard to reach those who are involved in sex trafficking, but also because EU financed support programs are failing to reach the most vulnerable. The conditions can sometimes be completely unreasonable. For example, girls can be demanded to have a high school degree when some of them haven’t gone to school at all. To receive support and a training programme it is sometimes demanded that they have a certificate from the police that prove that they are being taken advantage of. That situation is hard for many from a vulnerable background; some come from abuse and suspicion towards the government and the Police.

Another problem is attitudes and wrong ideas about voluntariness. Not everyone sees a sixteen year old girl as a victim. “It is her fault so you don’t care”. AsociatiaFREE sees how the women are controlled, the business organised and how they are forced by different reasons – sometimes poverty. AsociatiaFREE have their own way of contacting the women. They walk into massage parlours in the tourist frequented, old part of town which is really prostitution. As representatives from a women’s rights movement they can come in for a short moment to leave flyers that offer the women free manicure. Then, the women book a time for manicure and meet a woman from AsociatiaFREE that survived prostitution. They can tell her their sad story, and then see opportunities as well as receive support. Many are under 18 years old, and very vulnerable. Some of them are Roma. Laetitia means that the government doesn’t like to draw statistics regarding why the Roma people are so badly affected – they don’t want to stigmatise. Another reason can be that they, in the EU context, don’t want to show that they are incapable of improving the conditions for Roma integration. 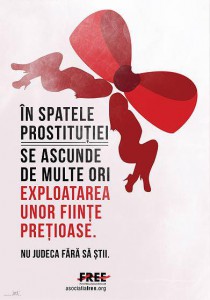 AsociatiaFREE will conduct their own investigation to make the issues visible. A poster on the wall, both visually and in text, show and important message: You see a prostitute – we see a treasure. In the background of prostitution – exploitation is hiding.. Don’t judge without knowing.

Finally, she tells us that they are open for cooperation with RealStars in the future. Exchange between us organisations that work against prostitution and trafficking is incredibly valuable and despite the challenges, the darkness, I can see how we resist, prevent and work for a world free of trafficking.