Through RealStar’s pioneering efforts with Thai massage salons, we have had hundreds of conversations with women and men at the salons. A frightening picture of the situation emerges with sexual exploitation, insecure work environment, vulnerability and lack of support and integration. Our initiative breaks the silence and we are proud of the film and labeling we have developed together with the industry to counteract sex purchases at massage salons. 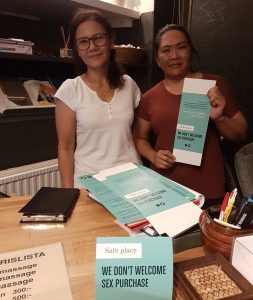 At PK Thaimassage in Stockholm, they use the label “We will not welcome sex purchase” and experience a safer working environment.

During the project An industry free from trafficking, which is funded by the Swedish Equality Authority, we have reached out with a film and labeling to over 500 salons in Stockholm, Gothenburg and Malmö through e-mail and mail. In addition, around 30 salons in the three major cities participated in information meetings during the fall, which provided the opportunity to discuss the situation, the vulnerability and punters more in-depth and find solutions together. We who have worked in the project have also visited and talked to the employees, usually women, at over a hundred salons to hand over material and show support as well as to inform about the Mikamottagningarna’s and Evonhuset’s support activities for people in prostitution. Prostitution is the most violent form of exploitation and is linked to both procuration and human trafficking.

In conversation with the women, we get a picture of what the situation looks like, and pretty much everyone talks about men who demand sexual acts and confirms that it occurs regularly. One woman says that young people usually walk past her salon and shout “happy ending”, another woman says that they only take drop-in customers until 6 pm because they don’t feel safe opening the door for people they don’t know later in the evening. Representatives from Swedish massage clinics confirm that the work environment problems have affected the industry as a whole, especially for women who work alone. These are people who support themselves in a profession that will make customers feel good through massage treatments, but at their workplace encounter abusive questions, comments and sexual misconduct.

Sexual exploitation is linked to travel and globalization. Probably a closer exchange between Sweden and Thailand has also contributed, where the backside is the so-called “sex tourism”. 80 percent of Swedes’ sex purchases occur abroad and Thailand is one of the countries where normalized prostitution thrives and widespread sexual exploitation occurs. The attitudes many travelers have regarding sex purchases abroad risks being adopted in Sweden. Some men ruin other people who are dehumanized and the reputation of the massage industry is affected as some men cannot separate body therapy and exploitation in prostitution. While training and efforts have been carried out for several years to equip the hotel industry to counteract the trade, unfortunately the development of massage / Thai salons has almost completely been able to continue without interference from the community. Therefore, prostitution continues relatively undisturbed and invisible at Thai salons where determined men call, email and visit the salons. 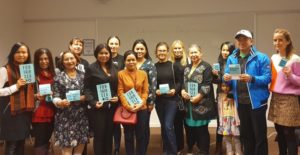 The information meeting in Stockholm on November 15 was rewarding.

Sweden’s law on sex purchases clearly states that the responsibility lies with the person who provides some type of compensation in exchange for sexual acts. Prostitution is a form of violence against women and the law recognizes the vulnerability behind it. We are pleased that our initiative has received media attention. Most recently, we were featured in Sweden’s Radio P4 Stockholm, where we talked about the situation and the work on Thai massage salons. Read the debate article in Aftonbladet, signed by RealStars together with non-profit associations and industry organizations. RealStar’s General Secretary Malin Roux Johansson and Moa Nilsson from Alishba Thaispa also attended SVT Morning Studio on November 26. Moa has worked in the industry for many years, and is one of the women who participates in the film where she shares her experiences of men who demand sexual acts but also how she, through determination and clarity, managed to stop the questions. Her advice, among other things, is to be clear with instructions that underwear must be kept on, and that payment should be made before the treatment. Moa uses the label in her salon, as do many others, and hopes that the industry can join together and take a stand against sex trade.

Big thanks to everyone who collaborated and supported this important project. We hope, of course, for continued funding and are glad to announce that there is great interest in continued work on the project and priorities among various partners. Contact us if you know of a salon that wants to be a part of this and take a stand. Send an email to info@realstars.eu