RealStars are working together with artists as a part of the project ”Voices for Fair Sex ”. The artists create works about Fair Sex. RealStars later exhibits these works to spread the message of sex on equal terms. The idea is that we will gather more signatures against trafficking with the help of the works of art.

We had an unveiling of two works of art at Röhsska museum on the anti-trafficking day, 18th October. The works were a picture made by Kasra Alikhani and a film by The New Beauty Council. In this online exhibition you can see these works and read more about the artists’ thoughts about fair sex and their artistic work. 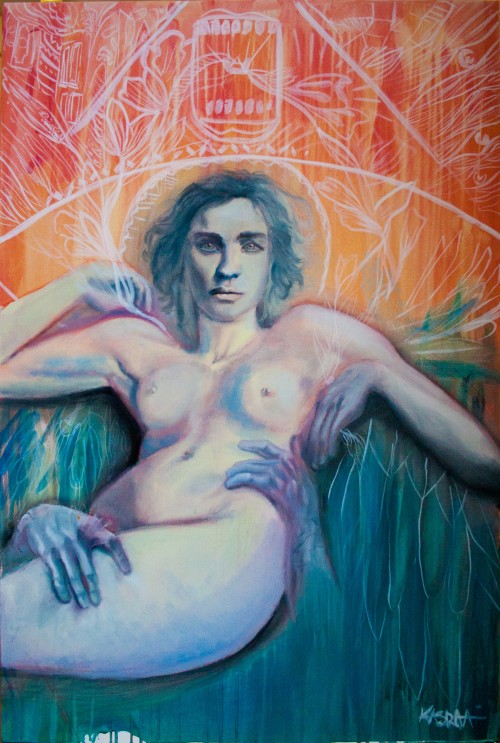 How has it been to work on your piece, what was your work-process like?
It’s been very interesting to paint, it gave me the chance to touch on such an important subject for an organization I believe in.
I have started reading about sex-trafficking and getting into what’s basic and human in it and finding something I can relate to. I wanted to put warmth against cold, light against darkness. Freedom is a given for us living in Sweden but to me freedom feels the strongest when you have experienced the opposite. In the dark, I want to show the distortedness in believing someone can control another person, taking their freedom. The light shows that there are voices who don’t accept it. I have made some sketches representing these feelings.

What do you want to express with this work?
I want to show how ugly and uncomfortable it is getting your humanity taken. I want a human expression to be in focus. Something you can’t shy away from, you have to feel. The main part of the picture in the middle represents a big eye where the pupil is the face of the figure, which I wanted to draw quite androgynous, so not particularly female. In contrast to the dark smothered half are the voices who burst open in warm, light tones. The hands clutching the figure are impersonal and cold, like stone figures.

What is a real star to you?
A person with the courage to question standards, not directed by society’s expectations and opinions. Someone in contact with their dreams who doesn’t let the rationality be too much in command.

How has it been to work on your piece, what was your work-process like?
In the beginning of May 2009, a group of women staged a carnival through Valla Torg. The women had met on several occasions to discuss how they could take back unsafe places using their bodies and movements. With whistles and tambourines they went through dark groves and graffiti covered underpasses, clad only in full-body paintings representing the “sluttily” dressed woman.
The documentation from this action analyzes ideas about public space created by media, politicians and the police. Specifically how these ideas affect women’s movements and behavior, for example on the streets at night. This concept of insecurity sets limits to women, although public places are actually more safe for women than men. This false notion about the vulnerability of women in public space creates behaviors and recreates the image that women should be afraid outdoors, during which the focus of violence and rape at home is transferred.

What do you want to express with this work?
Safe Slut investigates into how to appropriate dangerous zones and annex it with their bodies in order to reprogram this idea/image and take back freedom of movement. The naked body both masks and shows its nakedness to become a part of the investigative tool. During the carnival, esthetics is important – no one questions that it is about decorating a scene and that the costume should fit in. But it is more difficult to visualize how the everyday scene claims how to act. Safe Slut use the carnival idea as a way to investigate the terms of the everyday scene to find how bodies and carnivals create the space and how common objects can act as signals for another reality. All these function as clues to other stories.

What is a real star to you?
Wow, someone who practices what they teach, stands up for their ideals and sparkles.