In mid April, close to 40 representatives for the hotel and tourism industry gathered at Clarion Hotel Post, to jointly strengthen the work to make sex purchase and trafficking difficult to pursue in the industry. Prostitution occurs in different arenas, and hotels are one of them. RealStars is seeing the work progressing, and the campaign Hotels Against Trafficking forming a collective platform for hotels. A new educational movie from the County Administrative Board gives a concrete support to the industry.

RealStars is happy to be able to continue the work in the same spirit as in 2015, i.e. to create meeting points for the tourism industry. In 2016, the County Administrative Board of Stockholm and RealStars are collaborating to prevent prostitution and trafficking. An important tool in that work is the educational movie for hotels and taxies, developed by the County Administrative Board of Stockholm in cooperation with the prostitution squad of Stockholm’s police force. The movie was shown during the day and evoked many thoughts on how to detect prostitution , what different situations may look like and what personnel can do. Malin Roux Johansson, Operations Manager at RealStars, ushered in the day by telling of how RealStars prevent sex trafficking in society and pointing out that inputs are needed on different levels, like schools, as well as the european, the corporation and the individual level. Work of that kind contributes to lowering the demand.

Marina Johansson, counsilor, told of Gothenburg City’s preventive work to decrease gaps – ”we will mobilize to even out differences”. She also emphasized that myths of prostitution circulate, that it is in fact ”most often not a free choice” and that many find themselves outside society. Marina wants to see the work through Göteborg & Co evolve, and thinks it is positive that representatives from trade, industry and hotels are attending a day like this.

Maria Vallin, Passion Manager at Clarion Hotel Post, shared experiences from the hotel’s work against trafficking. Clarion Hotel Post is in on Hotels Against Trafficking and works on several fronts to impede sex purchase and trafficking, and contributes in a positive manner to non-profit organizations through charity events — through which RealStars, among others, has received support.

”We have to make it harder for sex buying clients. We have educated all our staff, when we hire new personnel we will educate again. It is constant work. We make it as dull as possible for these men. We have information in the elevator, in the room and we show that we are a Fair Sex hotel”. 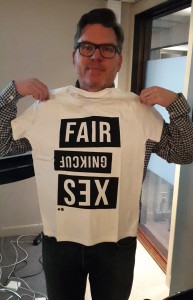 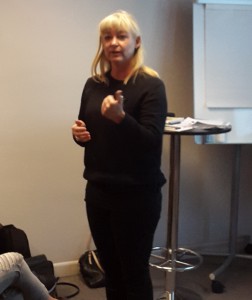 The afternoon continued with Niklas Kullinger, who told us about the concrete tool Safe Site which is used by 140 hotels in Stockholm and Gothenburg to prevent crime. We got to hear about how things work in different situations, as well as hopeful stories — people who have been saved out of prostitution and trafficking, and come to live in protected residencies.

The afternoon was marked by a large interest and dedication. One voice in the audience made the point that hotels and taxies should communicate clearly, together, that they back the work against trafficking — Hotels Against Trafficking. RealStars is seeing progress being made in the tourism industry and are looking forward to two similar competence days in Malmö and Stockholm.

Thank you to all who have contributed to this competence boost. A special thanks to our partners:

Clarion Hotel Post, Paradigm and the County Administrative Board of Stockholm