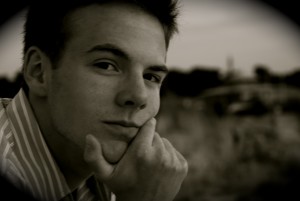 Rasmus Andersson talks about something which changed his view on trafficking. He’s studying social science.

Yesterday I saw one of the ubiquitous crime shows on TV. I was tired but not tired enough to fall asleep. So I was half-asleep and listened a bit to the show. After a while I was wide-awake. It was an unusually terrifying episode, young women and children were locked inside containers. The bits of the episode set inside the containers showed dark spaces completely packed with people. It was so crowded no one could stretch their legs and there was little air

A middle-aged man who was working at the docks heard coughs and sobs from one of these containers and opened it. A girl was ill and he brought her to the Romanian embassy to ask for first aid. Just as he exited the container one of the women inside closed the doors. They were so terrified and mentally damaged to not even dare go outside or try to escape. Escaping would probably lead to them being tracked down and killed or brought back to the containers so they can later be sold as sex slaves.

Even though the sick girl received medical aid and help, there were still hundreds of people left. They had been transported a long way by boat from countries like Romania, Moldavia and Belarus. Several people died on the journey due to lack of food, water and oxygen. This isn’t something made up – this is reality. Trafficking and human trade happens all over the world. Every day. Children and youngsters are ruthlessly exploited, hurt physically and mentally and later sold as sex slaves or to be abused in other ways.

I don’t remember what the show was called but I will never forget the awful images of the people in those containers – even if it wasn’t real.

I don’t even want to imagine how awful it is in real life.
Our world is no utopia and there can never be peace on earth – but we can work together, to stop things like trafficking. Sign the petition against trafficking – and do something to improve the lives of millions people.