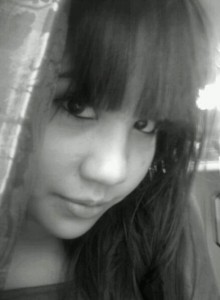 Elizabeth Granqvist wants to show what’s beautiful, positive or just commonplace. But also take a stand against everything unjust. Welcome!

It’s the middle of the 2000s. A stuffy NO-classroom is filled with a large group of pubescent, tired youths in the eighth class. A bumbling teacher who isn’t really comfortable with the work assignments speaks clearly, she emphasizes every word. The students sigh and think “we know”.

Right then I didn’t think about it. It was obvious to me. I do what I want, it’s my life. Nobody touches me without my consent. And I would never even try to take that right from someone else.

Now, almost seven years later, I understand that the world is different. Assaults and prostitution happen every day.

I can’t stop thinking about a certain article, it’s been seared to my mind. Every fifth woman in Cameroon has been raped or been a victim of attempted rape. In the article from SvD (15/7 2011) it says breast ironing will protect against rape. The procedure is performed by worried parents who burn off the girls’ breasts with heated stones.

The mutilation is performed so the men won’t find the women as attractive – and therefore will not rape them.

How do you protect yourself and your children against rape? Is it possible?

Painful mutilation won’t protect the girls. The responsibility for the rape has been moved from the perpetrators to the young girls. That responsibility shouldn’t be that of the victim’s, it is everyone else’s.

The problem is violence and exercise of power. Society should work with these matters constantly. In Cameroon as well as in Sweden.

I hope everyone will sigh when the teacher speaks of everyone’s right to their own bodies. Everyone should think it is a certainty that my body belongs to me and yours belongs to you, just as I did. No matter what country we live in. i.