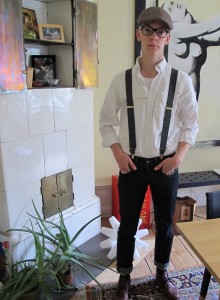 Ernst Adamson Borg is 18 years old, and is a senior at East high school. He majors in journalism and writes about trafficking in Germany, a country where trafficking is a significant problem. Ernst´s main interest is writing and debate.

Trafficking is such a large problem that I spend a lot of time thinking about it, I especially try to understand how widespread it is. Trafficking is horrible. So, I am doing what I can to inform the public about this huge illegal industry.

Is it considered so normal in Germany that no one even reacts, or reflects on what is going on? After I asked myself this question a few times I decided to ask some of my German friends. The answer I got was: “What, can´t you buy sex in Sweden?”. My suspicion is confirmed, it is no wonder that it is possible to buy sex in Germany.

The question that subsequently pops into my mind is: Can´t people see the problem with this? Forced prostitution, women as purchasable objects, trafficking and other incredibly macabre situations that prostitution entails? Maybe they do, but absolutely no one speaks about it.
In the land that is currently Europe’s engine, has around half a million prostitutes, about as many people as living in Gothenburg. The idea behind legalizing prostituion in Germany in 2002, was that working conditions (if you can ever call prostitution for “work”, I would term it as exploitation) for these prostitutes would improve, but according to studies, not much as changed.

All this speaks for itself, that legalizing prostitution does not improve conditions for these women, and it simplifies illegal activities.

Germany has tried to stop both trafficking and forced prostitution, but Germans are seldom informed on how prostitution works. This is due, in large part to the fact that newspapers seldom write about the problems of prostitution, so the debate rarely gets any attention. There are many people who think it is wrong, but unfortunately, these people work in silence. But the truth is that the number of convicted offenses concerning trafficking are increasing. One can interpret it in many ways, one could be that there are more resources for getting a hold of those who engage in human trafficking, or that human trafficking is increasing.

If you search for it, you will find studies by groups who pay attention to the problems of trafficking, but unfortunately it is not as accessible as it should be.