Our guest blogger Robert Schenck has read the book Pimp State and written a book review that highlights the importance of the sex purchase Act. In an easy-to-read format, the author Kat Banyard explains why the legalization of sex purchases is so problematic and how laws that allow prostitution are normative and characterize society’s view of women and humans. Banyard also holes many myths and notions of human trafficking and prostitution. 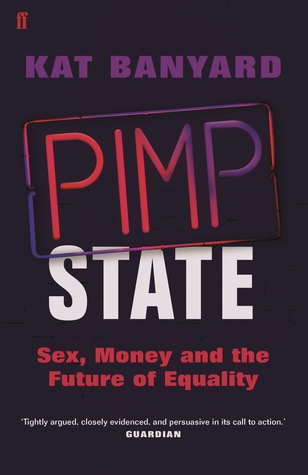 And judging by the reviews in England’s most prominent newspapers, which are quoted in the pocket edition (2017), in Pimp State she has convincingly succeeded in exposing the true faces of prostitution, pornography and strip clubs to British readers.

Banyard writes in a conversational tone that sometimes gets in the way of the subject’s seriousness (when, for example, she ironically argues as a convinced ”sex work lobbyist”) but which otherwise makes the book easily readable and easily accessible. She makes it clear that prostitution, pornography and strip clubs are nothing more than a gross exploitation and abuse of women, and that no regulation can make them safer or nicer. The book’s message is strong, clear and very well-founded with numerous references and interviews. In addition, the author is extremely knowledgeable and insightful.

The legalization of the sex industry in other countries has failed, not only with the stated intention of making prostitution as safe as “any other job”. Laws that allow prostitution are also extremely normative and affect society’s perception on women and humans. The large legal brothels in Germany and the “window shop prostitution” in the Netherlands, for example, communicates to passersby and the whole society that it is acceptable that human bodies are for sale, that women (which it is almost exclusively about) are objects without their own will and that they’re only designed to satisfy men’s all kinds of sexual fantasies, and that abuse and exploitation of women is allowed. The legal brothels also signal to international criminal networks that it is easy to place trafficked women from poorer countries here, which explains why the majority of women at these brothels are victims of human trafficking. It is therefore a myth that legalization and regulation make the sex industry less harmful and less dangerous. And it’s not just a myth, it’s an equation and contradiction that doesn’t go together.

Other myths that Banyard crushes are, for example, that prostitution is comparable to other work in the service sector, that pornography is just fantasy separate from reality, that those who criticize prostitution are prudish and that it is worthless to fight the sex industry. Unfortunately, reputable UN organizations, George Soro’s philanthropic organization Open Society Foundation and Amnesty International have fallen for these myths. In an astonishing way, they have advocated various forms of legalization and refrained from supporting “The Nordic Model”. It will take courage from them to change their position in the future:

“Consider what it will take for Amnesty International to reverse its framing of prostitution as ‘sex work’ and to make a volte-face on its call for pimping and brothel-keeping to be legal. The level of institutional failure necessary to produce that recommendation is so great that the reputation of the individuals responsible for it, and their positions within the organization, are likely at stake. It will take considerable internal leadership to acknowledge what’s gone wrong and to redress the damage inflicted on the organisation’s credibility, let alone its contribution to the struggle for women’s rights.” (s. 213)

There are now a number of excellent books on the European and global sex trade, which not only stirs and engages, but also equips us who want to fight against the broader human view it represents with powerful arguments. In addition to Pimp State, I think of Rachel Moran’s excellent Paid For, Prostitution Narratives: Stories of Survival in the Sex Trade by Spinifex Press, The Pimping of Prostitution by Julie Bindel, The Sex Economy by Monica O’Connor and the of the Swedish police officer Simon Häggström’s down-to-earth books. Häggström has worked with crimes related to prostitution and human trafficking since 2007 and he has written several books about his work. Read the reviews of these books here on the RealStars website, and most importantly, read the books! Sometimes it is reading about a sad reality but it is important reading that also gives hope.