When are the girls who become victims of trafficking going to be able to enjoy the same human rights as the rest of us? Recently, the EU took a step in the right direction in the process of agreeing on a new anti-trafficking directive. The issue, currently being discussed at the EU parliament, would make it illegal to buy sex from persons who are victims of trafficking.

The law proposal is partially a positive issue as the focus is on the demand for commercial sex – which is the reason trafficking exists. Therefore, in order to attack trafficking the demand for prostitution needs to be attacked. We know that many of the prostitutes are trafficked women, girls and boys. Trafficking and prostitution is often just a different side of the same coin. 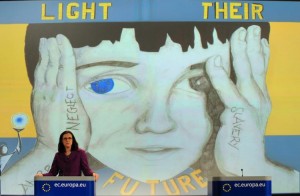 A similar experience can be found across the Baltic Sea: Finland made buying sex from victims of trafficking or pimping criminal in October 2006. But this didn’t lead to an actual prosecution until the end of 2008 and the situation of trafficked people in Finland has not improved significantly. The police says it is hard to enforce the law. The men accused of buying sex from sex slaves often say they were completely unaware of the fate of the women.

The fact that trafficking is now being discussed in the EU is positive but for the the new law to be effective and actually reduce trafficking, a lot of resources, courage and active measures are needed. It is only when there are no new trafficking victims and those already affected are given a better life we know that the law has had an effect.

Denmark and Britain are reluctant

Two EU countries, Denmark and Britain, have shown reluctance to support the anti-trafficking proposal. They present a variety of reasons: the UK government claims that they already have sufficient legislation to combat trafficking and protect the vulnerable. The debate is intense and many politicians and anti-trafficking organisations are very critical. Labor politician Denis MacShane says that this is the wrong signal to send to the traffickers and pimps.

Danish newspapers are writing that the country might become the only EU nation where it is legal to buy sex from trafficked women – if the new EU-proposal is accepted.

Britta Thomson, a Danish social democrat, says that it is a shame for Denmark and equates trafficking with slavery. On the other hand, those who criticize the law proposal claim that it would be harmful for women – sex slavery would go underground.

It is good that the issue receives attention at the EU. But in order to stop trafficking an explicit and strong EU-legislation is needed. Everyone wins with a socially sustainable society where no one is subject for such an inhuman treatment as trafficking. The next step will be negotiations between the Parliament and the Council. These will begin in mid-September, so stay tuned for updates.

Three organisations (Antislavery International, together with ECPAT and 38degrees) have started a campaign that calls for Britain to sign the bill.

Be a real star and sign the petition here!