The year is 2010. There is a fiery debate in Sweden about the being or not being of prostitution. In the middle of the chaotic discussions, Kajsa Ekis Ekman publishes her debut book “Varat och varan: Prostitution, surrogatmödraskap och den delade människan”.

“Varat och varan” is important in many aspects. It’s a debate book which has been recognized, created discussions and still evokes strong feelings among its readers. Some people embrace it while others denounce it as a lengthy and distorted view of reality. No matter how you view prostitution, humanity or feminism it is definitely a good read. Everyone has an opinion about it and can help invigorate the debate.

Ekis Ekman primarily focuses on the problems when people become divided when they are prostitutes or surrogate mothers, the self and the product. The self refers to the ego while the product refers to the service or product you sell, in this case your body. Those who advocate prostitution state that man can separate the self from the product and this proves he or she will not suffer from any psychological damages of prostitution or surrogate motherhood. Ekis Ekman says that the persons puts themselves in this state partly to take a distance from the notion that they sell themselves. Partly they do it to justify what they do and are exposed to. It’s not uncommon that they distance themselves from prostitution to manage everyday life and not go under.

The book continually emphasizes the prostitutes both as actual victims and as the subject they chose themselves to be in the situation they are in. Some people attempt to paint a picture of prostitutes as independent entrepreneurs in a serious line of work. Ekis Ekman however, points out that they are actually employed by so called pimps who sadly run an often legal organization where they trade people’s bodies as commodities. How does this differ from what we usually call human trading?

If one chooses to see prostitution as a vocation, studies show that the physical acts of violence is much higher than what would be tolerated in any other line of work. Out of 800 interviewed female prostitutes in nine different countries, 89 percent said they would leave their job if they could. 71 percent say they are victims of physical violence and 63 percent say they have been raped at “work”. Not many workers hate their job this much and at the same time keep coming to work “voluntarily”.

In reality, prostitution and trafficking are usually connected. Two types of human trading which often coincide. Where there is trafficking, there is prostitution and vice versa. Context doesn’t matter – sex should always be on equal terms, which it probably can’t be if the other partner is paid to afford food and shelter. 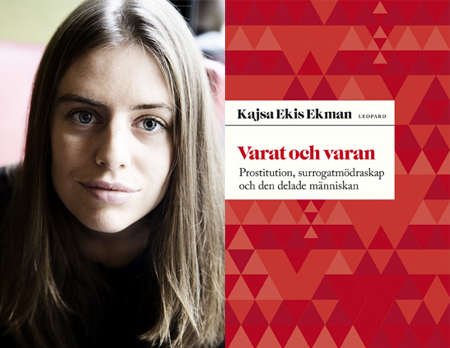 You can read more of Kajsa’s texts at her blog.