This week we visited the athletics school Prolympia in West Gothenburg. Everyone in eighth class have the theme sex and coexistence the whole week. A fantastic initiative, we think, and we were very happy to be able to be there during two whole days and meet four different classes. The visits included exciting discussions and reflections and a lot of innovative creating. 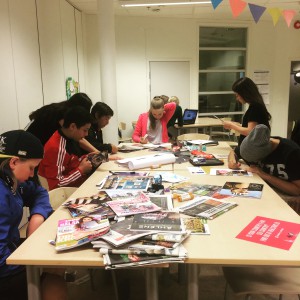 Trafficking and the connection to prostitution was something that was new to most students. Many also asked questions and it was clear that they were doing a lot of reflection during the visit. A lot of people could not comprehend how it is possible that brothels are legal in Germany. They also wondered why Sweden is not doing more to support and help people that are involved in prostitution, that want to leave that life. Several students asked a lot about the Swedish legislation and many also had their own stories of when they had seen prostitution up close, in Thailand for example.

The students raised examples from reality, but also from the world of movies and videogames, wherefore it became very clear at what an early age young people in Sweden are exposed to both prostitution and other forms of sexual exploitation.

What do you think about that approximately 8% of all Swedish men have bought sex at least once? One of the students quickly raised their hand and answered: “It is 8% too many”. 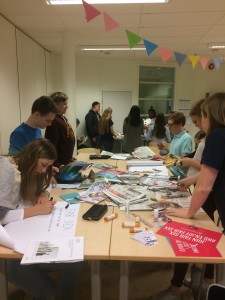 During the creative workshop, many worked in groups where they continued to discuss what we talked about during the lecture. Many took pictures with messages and posted it on their social media channels. We also gained many followers on our Instagram during the visits.

During the discussions, the students had the courage to stand up for their own opinion and reason and argue. Occasionally, there were some very intense discussions when students placed themselves all over the scale from Unfair to Fair Sex during the valuation exercise called “Gray area”. In this exercise, different statements that are closely related to sex, relationships and what is okay or not okay to do are made.

Soon, the students’ creations will be published on Creativity for Fair sex – keep an eye open there, or even easier: Follow us on Facebook to receive the latest news!

I want to thank all the helpful and encouraging teachers and all fantastic students I met! You are all stars and RealStars hope that we will be allowed to come back to Prolympia next academic year!