Three students in Trollhättan  started a ‘UF’* company and developed a combined swizzle stick and drug testing device to prevent girls being drugged and becoming easy targets for rape. They have now decided to donate 10% of their profits to RealStars.

Ida, Elin and Sofie are currently undertaking their final year of Hotel and Tourism Studies at the Magnus Åbergs Gynmasium in Trollhättan. As part of their studies, they decided to start a UF-company (‘UF’ is an acronym in Swedish for Ung Företagsamhet or Young Company Program as it is called in English). They decided that their company would focus on reducing drug related sex crimes and promoting safer nights out. The idea is as simple as it is clever: combine a swizzle stick and a drug tester which, by changing color, reveals if the drink contains something it shouldn’t.

RealStars sent an email to the girls at Colour Me Safe and asked some questions:

Why did you choose to start Colour Me Safe?

The reason we started Colour Me Safe UF was that we know people who have been victims. When we undertook market research where we presented our idea, we heard a lot of personal stories about friends or daughters that have been victims. In the end, we understood that this was a societal problem and that we wanted to make a difference. 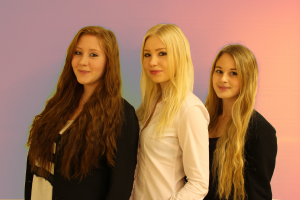 Ida, Elin and Sofia have together started the company Colour Me Safe UF.

You have decided to give some of your profits to RealStars work against trafficking?

The reason we chose RealStars is sex crimes – the reason that many people are drugged in bars and clubs is so that they become easy targets for rape. After RealStars made a presentation to our class we made a decision to support them as we were looking for an organization that had a link to what we were working with.

The swizzle sticks are now being developed and during that time there is a substitute product available called ‘safe stripes’ which fulfills much the same function.

* a UF company is a company form created to allow young school age people to establish companies and encourage entrepreneurship.