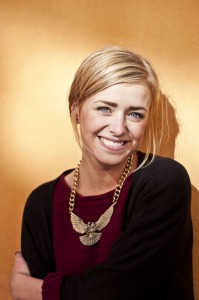 It was about time for Clara Henry to answer our three questions. Clara is a well-known blogger, comedian and anchor, who has gotten involved in the battle against sex trafficking.

1. What would you do to make the world a better place?

That is a really difficult question, especially if you are like me and believe that the purpose of life is the meaninglessness. I am so small and I have so little power in the grand scheme of things, so even if I wanted to make a change it would take me a lifetime to reach out. However, I do believe that what I am doing right now, talking about my life and my thoughts on youtube and hopefully through that strengthen youths’ confidence and their will to dare to be themselves, might be is a small step towards making the world a better place.

2. Why did you choose to react to Paradise Hotel?

I wanted to make a vlogg about Paradise as it always is a hot topic around this time of year. I have never followed the show but my viewers wanted to know about my opinions. However, I do not see the point in humiliating and mocking the participants, as I have seen others do, that was never the goal. On the other hand, I do think it is important to highlight the sexual structure at the hotel, which even I, who do not follow the show, notice through articles and tweets. It became a natural part of the video, as such things are pretty easy to create satire based off of.

3. What are the societal challenges of reaching sex trafficking and other expressions of unfair sex (various forms of abuse)?

I think one of the greatest challenges lies in the fact that unfair sex is so secreted. The number of unrecorded cases is massive and one can only guess how many cases of abuse that actually takes place. When I made the video, I also got a scary of number of comments stating that prostitution should be legalized, that it contradicts human rights to strip a woman of the power to sell her own body. I was actually scared when I read these comments, what do these commenters really believe, that prostitution is a happily chosen career path rather than a last resort? The misogyny of our society and the constant, submersed idea that others can freely use a woman’s body is in my perspective the greatest challenge. Without this, I believe, trafficking would not exist at all.

See Clara’s videoblogg about Paradise Hotel, where she wears our sweater and acknowledges our message: