RealStars in Brussels! Yep, it is time to take a step out into Europe and spread the message of Fair Sex through meetings with politicians, lobbyists and other organizations (non-profit). Me and Vanessa Corneliusson were at location.

We started with meeting the Swedish Members of the European Parliament and afterwards, we visited the EU Commission, that is the anti-trafficking coordinator whose task is to secure EU’s strategy in eradicating human trading. It was launched in June as an aid to the new law which is currently in the process of being introduced to all member states. 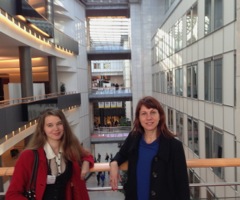 The strategy is a step in the right direction. RealStars however, feels that their strategy is too obtuse to actually stop the demand for women, girls and boys – our time’s – sex slaves. One of the priorities is to reduce the demand and a study will be done to research the demand in different EU countries. At the same time, you may wonder why that much money is to be spent on something which should be possible to sort out with the help of campaigns to change attitudes on paying for sex (a legislation we are waiting for). On the other hand, more research might be needed so that countries with legalized and normalized prostitution will observe the problem with the demand and the sex trade!

The issue is important and topical in Europe. Statistics show that 93 percent of Europe’s population believes EU member states should work together to fight trafficking.

To protect those who risk becoming victims of Europe’s sex trade, we must make laws to disallow the possibility to purchase sex in all of EU.

As a Swedish organization working to put focus on the demand, we were met with much interest at the Commission among politicians and organizations. We have an important part to play among the influential. Especially when many of them represent a normalized view on buying sex and those who are advocates of prostitution constitute a large part.

Many people help us. Special thanks to Kreab Gavin Anderson for valued insight before our visit to Brussels.