On International Women’s day on the 8th of March, RealStars attended and hosted events in Gothenburg and Stockholm to give attention to prostitution and human trafficking as forms of gender-based violence against women.

94% of those subjected to human trafficking for sexual purposes are girls and women, according to the UN:s body against organized crime. Goal 5.2 in agenda 2030 is to abolish all forms of violence against women and girls in the public and private domain. Sweden’s government defines sexual services as a form of men’s violence against women. Since trade with girls and women is accepted in parts of the worlds where sex purchasing is legal, RealStars views the International Women’s Day as an important day to highlight these issues together with other organizations and organs.

The newly started organization RealStars Stockholm hosted an event in Stockholm together with our partner Clarion Hotel Stockholm, who takes an active stand against prostitution through RealStars initiative Hotels Against Trafficking. Ninna Mörner from Swedish Platform Civil Society against Human Trafficking shared the Platform’s experiences of working with people who have been exposed to human trafficking. Ninna brought up the particularly vulnerable position of female migrants. During the evening, the attendants could take part of an exhibition with stories from those that the Platform has met. The Exhibition also showcased the review that the network Schyst Resande has done together with the journalist Joakim Medin, about Swedish sex purchasers in Thailand.

The exhibition from Swedish Platform Civil Society against Human Trafficking 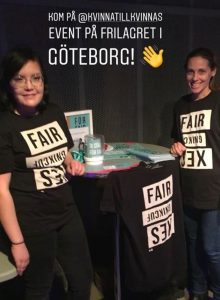 RealStars attended the manifestation in Gothenburg on Järntorget, and later in the evening Kvinna till Kvinna’s event at Frilagret. During the event at Frilagret we showcased the same exhibition as in Stockholm, and we had a table with information about RealStars’ work. Tjejjouren Väst gave a lecture about their work during the evening, and we got to listen to spoken word and feministic songs. Seven bars on Andra långgatan attended during the evening by spreading information and raising money for RealStars.

Thanks to all collaborating partners and attendees for inspiring and educative events!