The highlight of the campaign and the vision A Europe free from trafficking! Yes, we sent all signatures to EU decision-makers on the Anti-Trafficking Day, October 18. Also the Anti-Trafficking Day at Moderna Museet (The Museum of Modern Art). Let’s talk about Sex, Fair Sex, (more info about the event and some short films will be uploaded).

Our voice is stronger in numbers. It’s great, we collected almost 1500 signatures during the campaign for the Petition:

“I have a passion for freedom and human rights, and call upon EU to provide increased protection for the victims of exploitation.

I also call upon EU to make laws that hold sex buyers responsible for their share in the exploitation.” 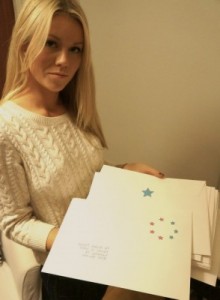 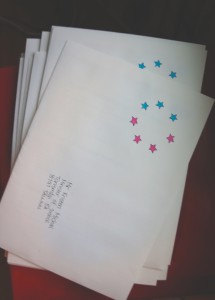 As is tradition, second year running at least, we decorated the letters with stars. Matilda Reiderstedt and Linda Kyrk (who had this year’s design ideas) put stars on the letters which will point out changes that are needed. The letters were sent to Justice Ministers in 27 EU countries on the Sunday before the Anti-Trafficking Day.

It is good that we are expressing and influencing! We know that change in society takes time. RealStars has a good direction and supports efforts for change in EU countries. Ignoring the sex buyer’s responsibility in the trafficking chain is illogical and simply wrong since this person provides the money which makes it profitable and exploits the most vulnerable people in Europe.

Thanks to everyone who made it possible to have the Fair Sex campaign and the Anti-Trafficking Day at Moderna Museet. We were encouraged, inspired and learned from one another. Many more eyes were opened to trafficking! We want to continue to inspire more people to act against Trafficking and for Fair Sex.